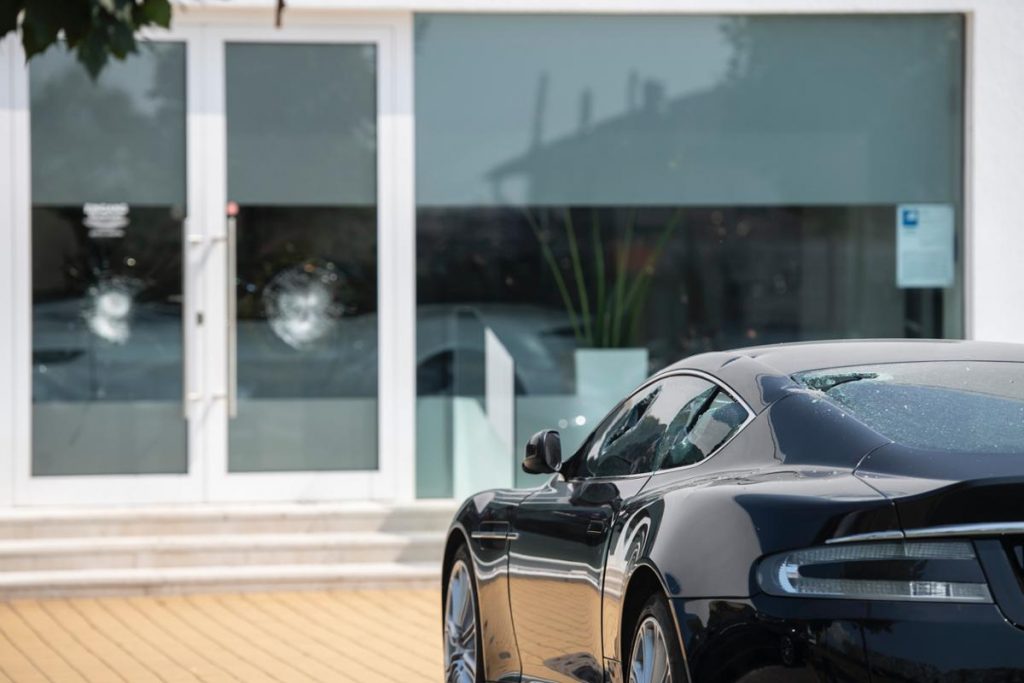 Our targeted action was a transgression of the law – therefore we did not publicly announce it. We place ourselves within the tradition of militant social movements. Like the movement that fought for nuclear phase-out against the once powerful nuclear industry. Like the one in Hambach Forest that is trying to push through the coal phase-out today. Or those who fought for years here at Frankfurt Airport against the commissioning and construction of the West Runway. Social movements need the breaking of rules, disobedience and even militancy. Only in this way will it be possible to share our perspective and demands against those in power and the majority of society, make them clear and implement them. Militancy is necessary and legitimate.

In two week’s time, the propaganda event known as the International Motor Show (IAA) will once again begin in Frankfurt, where the main climate damaging and environmentally destructive transport system of yesterday will be hyped and exhibited.

We support and show solidarity with the activists who want to blockade the IAA (even if that solidarity may not be reciprocal). Quite rightly, their call for action states: “At the IAA in Frankfurt, the German car sales ministry and the heads of VW, Daimler, BMW & Co. will celebrate themselves and their metal boxes. No wonder: The automobile industry is one of the most powerful factions of the German economy and forms the foundation of the German export model – with devastating ecological, social and economic consequences worldwide”. We also want to expose this show for what it really is: a logic of profit built on the backs of the poorest and future generations. We think it is high time to throw stones into the gears of the car industry and the capitalist profit logic as a whole!

Capitalism is racing full throttle into global warming with unforseeable consequences. While the traffic turnaround should have been in full swing long ago, the car industry is selling its flashy sleds to the apparent winners of the capitalist economic system. The bigger the climate crisis becomes, the bigger the social gap widens and the bigger and more monstrous the cars of the upper class become. Completely detached from their utility value, they serve as status symbols. They are supposed to symbolize: “I always hold the pole position in the capitalist struggle for survival. I am stronger than you and I will flatten you with my urban tank. Today I only think of myself and my family and I don’t give a shit how tomorrow will turn out”.

We say: Enough! Nobody needs to drive luxury cars!

Look for some other status symbols to make you feel good about yourself!

And because appeals are useless, because it has been communicated openly 1000s of times to everyone about how destructive car technology is, yet millions remain fascinated by it and can hardly imagine anything more beautiful than driving a Jaguar, a Land Rover or an Aston Martin at least once in their lives, it is time to make the facts visible! It is time to start disposing of these dirty machines with slingshots! That’s why we met with some sensible people in the early morning hours of August 26th, 2019. In Kronberg we destroyed the entrance area of Jaguar Germany, Land Rover and Aston Martin and tried to destroy as many luxury cars as possible. We managed to destroy at least 40.

Not only is a moving car a catastrophe, so is the production of it, both ecologically and socially.

We also place our action within the context of the struggle for livable cities based on concepts of solidarity. Today’s Land Rovers do not drive off-road, but in the overcrowded confines of the cities. Where it has become chic for the rich urban upper classes to live, where rents are rising, where established neighborhoods are being destroyed and where low-income earners are being pushed to the outskirts of the cities. We say: A city for all instead of a city for the rich.

Everything has been said. Everybody knows. Everybody needs to decide. It is time to act.

We call for participation in the action days, the demonstration and the blockades of the IAA on the 14th and 15th of September.

We call for solidarity with the local Fridays for Future student mobilizations and the Global Climate Strike.

We call for action against the capitalist insanity of ecological and social destruction. We address this in particular to the possible critics of our action.

We send solidarity greetings to the activists in the Basque Country who are protesting against the propaganda show known as the G7 Summit, where the centralized system of climate damaging and environmentally destructive government is being hyped since since it began yesterday.

We send solidarity greetings to all prisoners and victims of the repression during and after the G20 Summit in Hamburg, especially Loic and the Park Bench 3.

We send solidarity greetings to all those who oppose gentrification and repression, especially the Liebig 34 in Berlin.

We send solidarity greetings from Kronberg to Lisa who is still in prison!

Stones in the Gearbox