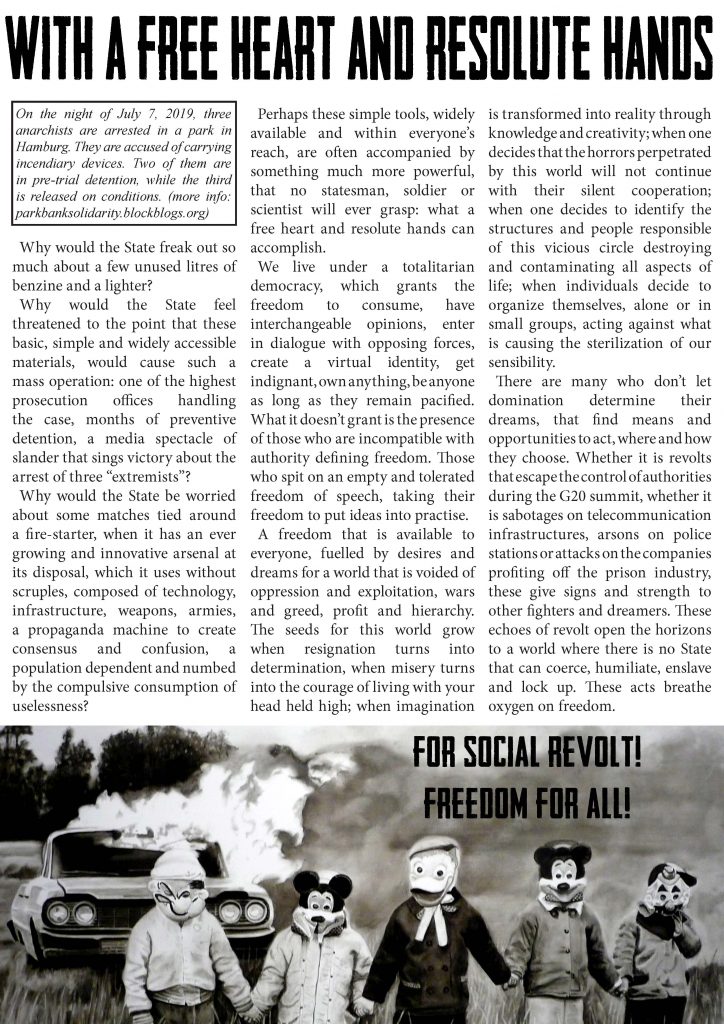 WITH A FREE HEART AND RESOLUTE HANDS

On the night of July 7, 2019, three anarchists are arrested in a park in Hamburg. They are accused of carrying incendiary devices. Two of them are in pre-trial detention, while the third is released on conditions.

Why would the State freak out so much about a few unused litres of benzine and a lighter?

Why would the State feel threatened to the point that these basic, simple and widely accessible materials, would cause such a mass operation: the highest prosecution office handling the case, months of preventive detention, a media spectacle of slander that sings victory about the arrest of three “extremists”?

Why would the State be worried about some matches tied around a fire-starter, when it has an ever growing and innovative arsenal at its disposal, which it uses without scruples, composed of technology, infrastructure, weapons, armies, a propaganda machine to create consensus and confusion, a population dependent and numbed by the compulsive consumption of uselessness?

Perhaps these simple tools, widely available and within everyone’s reach, are often accompanied by something much more powerful, that no statesman, soldier or scientist will ever grasp: what a free heart and resolute hands can accomplish.

We live under a totalitarian democracy, which grants the freedom to consume, have interchangeable opinions, enter in dialogue with opposing forces, create a virtual identity, get indignant, own anything, be anyone as long as they remain pacified. What it doesn’t grant is the presence of those who are incompatible with authority defining freedom. Those who spit on an empty and tolerated freedom of speech, taking their freedom to put ideas into practise.

A freedom that is available to everyone, fuelled by desires and dreams for a world that is voided of oppression and exploitation, wars and greed, profit and hierarchy. The seeds for this world grow when resignation turns into determination, when misery turns into the courage of living with your head held high; when imagination is transformed into reality through knowledge and creativity; when one decides that the horrors perpetrated by this world will not continue with their silent cooperation; when one decides to identify the structures and people responsible of this vicious circle destroying and contaminating all aspects of life; when individuals decide to organize themselves, alone or in small groups, acting against what is causing the sterilization of our sensibility.

There are many who don’t let domination determine their dreams, that find means and opportunities to act, where and how they choose. Whether it is revolts that escape the control of authorities during the G20 summit, whether it is sabotages on telecommunication infrastructures, arsons on police stations or attacks on the companies profiting off the prison industry, these give signs and strength to other fighters and dreamers. These echoes of revolt open the horizons to a world where there is no State that can coerce, humiliate, enslave and lock up. These acts breathe oxygen on freedom.

For social revolt!
Freedom for all!